Please enable JavaScript in your browser.

We should be slowly cooling, moving towards the next ice age. Instead, the earth has heated by 1.2°C above pre-industrial levels and Canada has heated by two to three times the global average. At our current trajectory, conservative estimates project a global increase of between 3-4 degrees within 80 years. Even at the lowest emissions scenario, by 2050 Canada is expected to heat 2°C above the average temperature we experienced in the years 1986-2005 (Canada’s Changing Climate Report).

In British Columbia (BC), glacier area declined by 11% between 1985 and 2005. The rate of loss is accelerating and glaciers are expected to lose 30-50% additional volume by 2050, thereby decreasing freshwater sources and heavily impacting related ecosystems (Preliminary Strategic Climate Risk Assessment report). Canada’s Changing Climate Report describes the rate of loss as “unprecedented over several millennia.” In a medium emissions scenario, by the end of this century the glaciers in western Canada are projected to be mostly gone, having declined by 70-95%.

Athabasca Glacier is the most visited glacier in North America. It forms part of the Columbia Icefield and is estimated to be approximately 300 m deep. In addition to receding, the glacier is thinning by 5 metres each year. 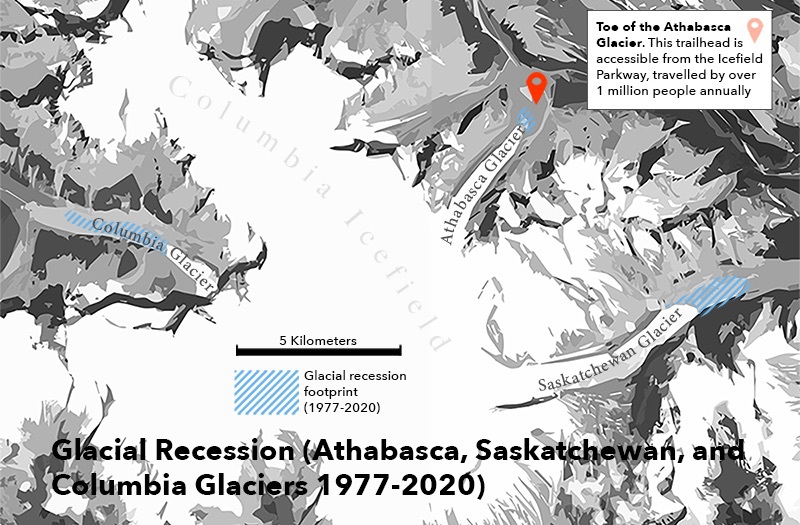 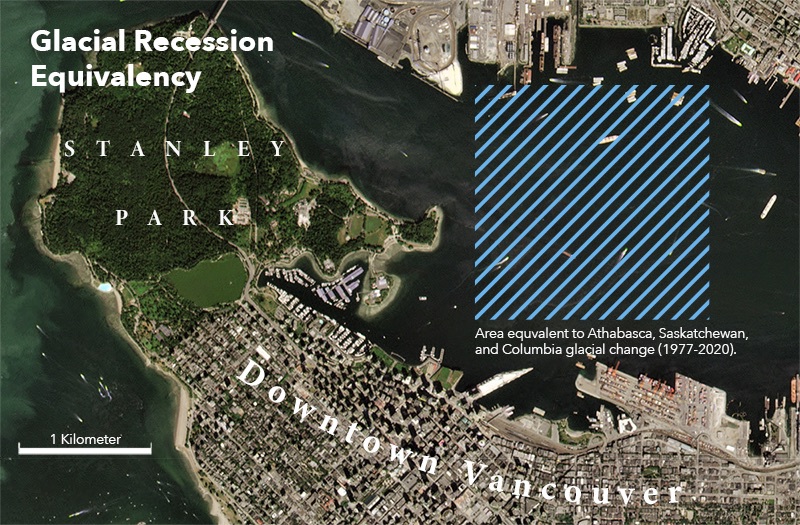 Left: Aerial image of the Columbia Icefield, highlighting the extent of recession of the Athabasca, Columbia, and Saskatchewan Glaciers between 1977 and 2020. Right: aerial image compiling the surface area lost on these three glaciers over 43 years and visualizes that area mapped onto downtown Vancouver and Vancouver Harbour. Images compiled by Evan Thornberry, UBC Library.

Beyond the Athabasca Glacier

Water from the Columbia Icefield flows to the Arctic, Atlantic, and Pacific oceans. BC has about 17,000 glaciers and Alberta has 800 glaciers that, like the glaciers of the Columbia Icefield, help shape and maintain ecosystems throughout western Canada. Scientists at the University of Northern British Columbia estimate that BC’s glaciers are losing 22 billion cubic metres of water each year (Climate Change and BC’s Glaciers).

The effects of glacier recession include loss of ecosystems and forests, and severe impacts on aquatic species such as salmon due to decreased streamflow and increased water temperatures. Impacts also include reductions in water supply and increased risk and loss for power generation, agriculture, and industries (Preliminary Strategic Climate Risk Assessment report). Glacial melt is also one of the main contributors to rising sea levels.

IPCC Special Report on the Ocean and Cryosphere in a Changing Climate finds “that the world’s ocean and cryosphere have been ‘taking the heat’ for climate change for decades. The consequences for nature and humanity are sweeping and severe. This report highlights the urgency of timely, ambitious, coordinated, and enduring action.” 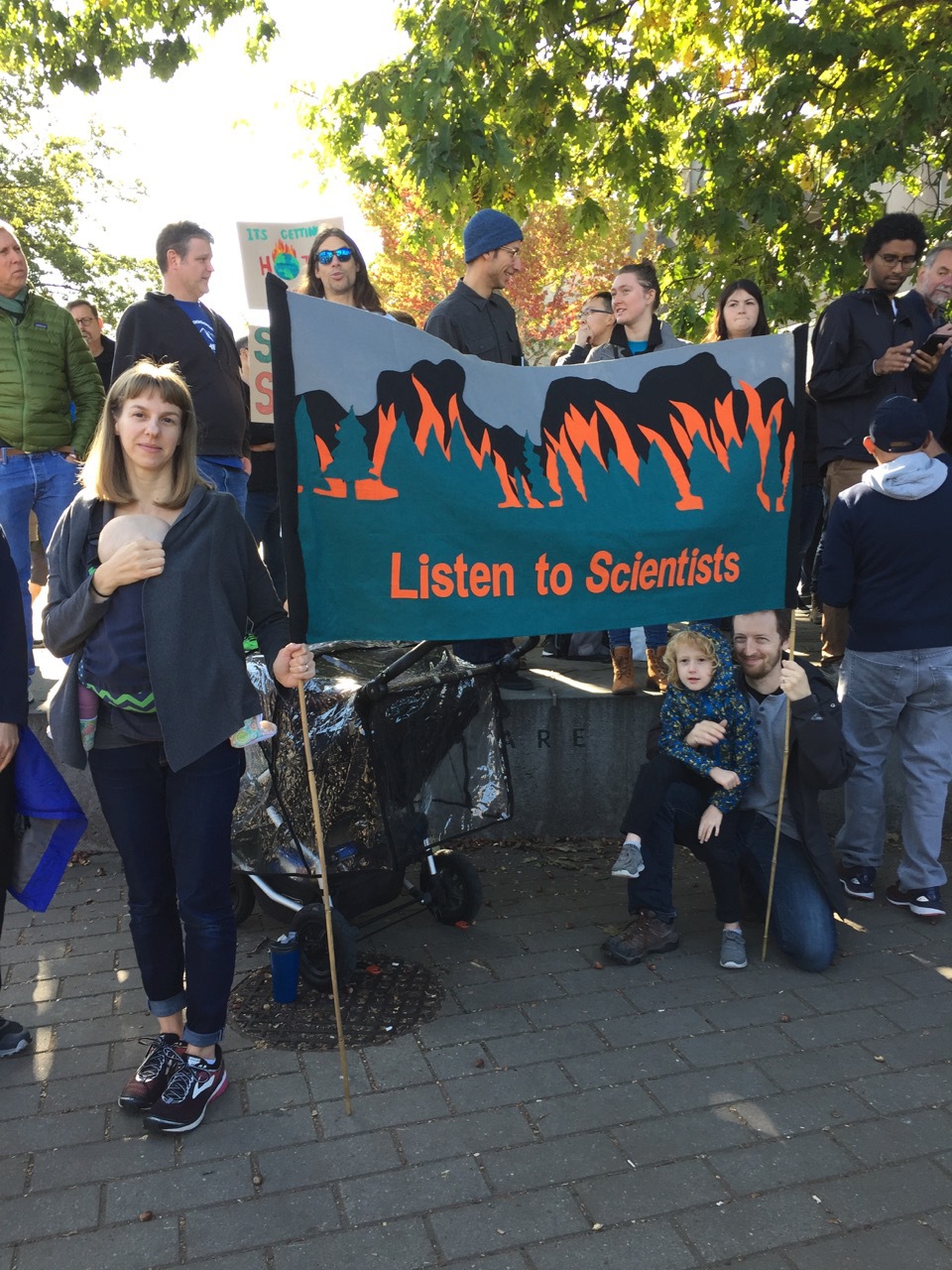 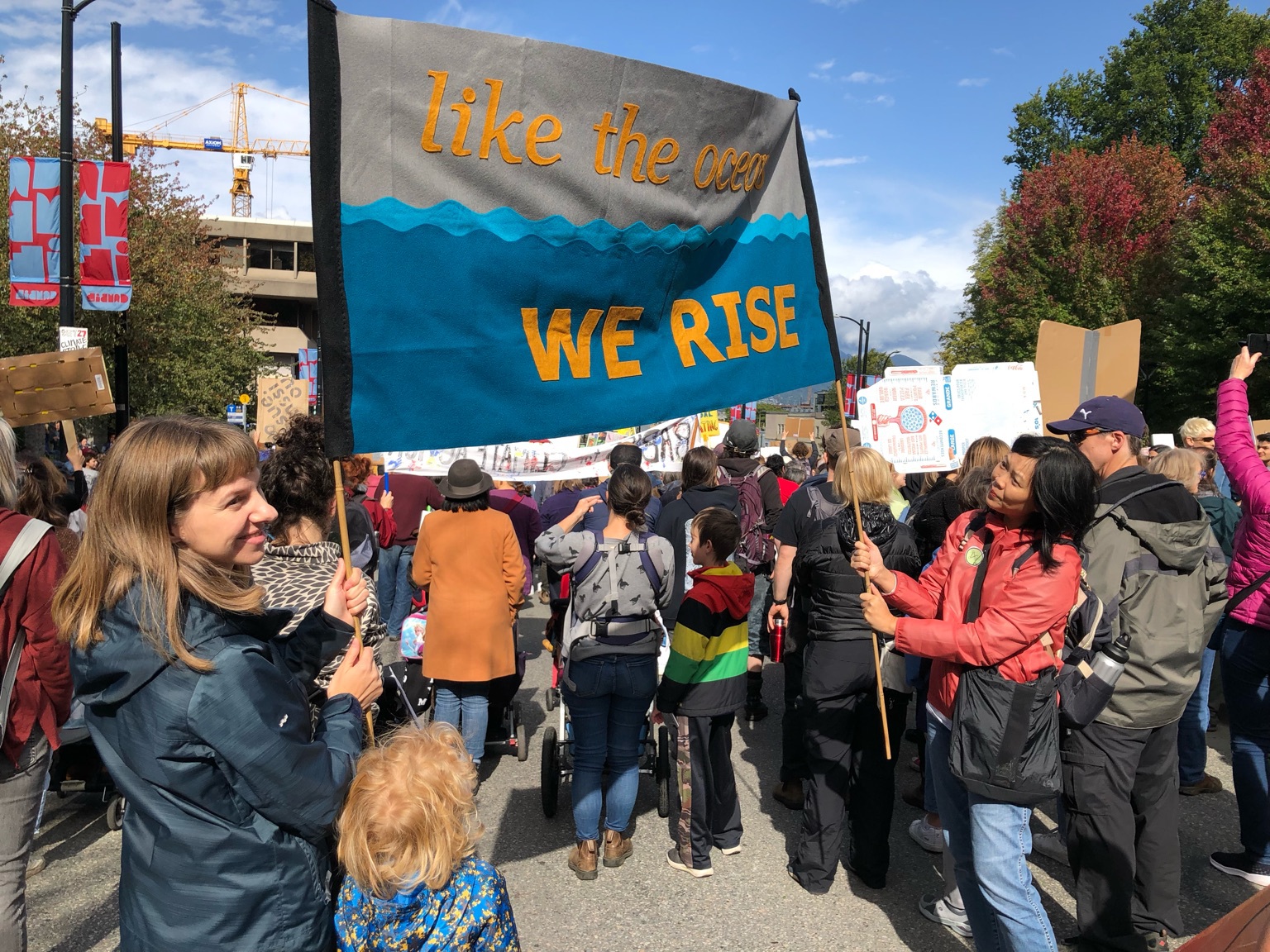 Above and left: “Listen to Scientists” banner at the UBC action and main strike at City Hall, September 27, 2019. More than 800,000 people marched in Canada and approximately 7 million marched worldwide. Photo courtesy of Sally Taylor and Helen Brown, UBC Library.